Mahindra Thar is currently one of the most popular SUV in the Indian market. It has been a popular SUV among off-road enthusiasts and there are several videos available online that show the off-road capabilities of the same. The popularity of Mahindra Thar touched sky when the manufacturer launched the new generation Thar. It was a much more improved version of the older version and that is why there is a waiting period of over an year on the SUV. Meanwhile, there are several used car dealers who deal in both old and new new-generation used Thar SUVs. Here we have a video where a fully modified old-generation Mahindra Thar is available for sale.

The vide has been uploaded by SARDARJI KARWALE on their YouTube channel. In this video, seller talks about the features and customisations that are made to this old-generation Mahindra Thar. In case of the last generation Thar, it is quite hard to find an SUV with absolutely no modification. This Mahindra Thar is no different. Starting with the front, the stock grille on the SUV has been replaced with an aftermarket unit.

There is a metal bumper in the front with a bull bar installed on it. LED bar is installed below the metal bumper and there are LED fog lamps integrated inside the metal bumper. A set of aftermarket turn indicators are also placed on the lower part of the front grille. Coming to the side profile, the major attraction on this Thar are the wheels. The car gets aftermarket rims and massive 50 inch off-road tyres. The overall stance of the SUV has changed and it looks like the car has been lifted as well. 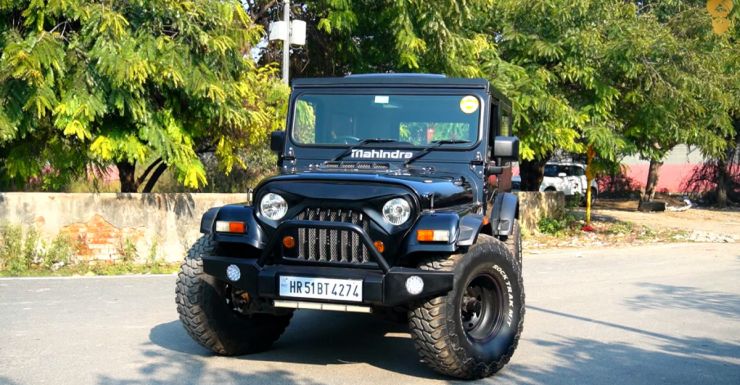 The wheel arches get fender flares and there is a metal rock slider installed on the car as well. The old generation Mahindra Thar was only available with a soft top. This has been changed and it now comes with an aftermarket metal hard top from Bimbra. The seller mentions that all the modifications seen on this SUV are done from Bimbra 4×4, which is a garage that specialises in SUV customisations. The ORVMs on this Thar are also aftermarket units.

As we move to the rear, the 50 inch massive spare wheel is mounted on the tailgate. There are several auxiliary lamps on the rear bumper but, it retains the stock halogen tail lamps. The car also gets tow hook on the rear bumper. The SUV is in gloss black shade and looks in good condition.

The cabin on this Mahindra Thar has also been customised. The pillars and the roof now get leatherette upholstery and there is a massive manual panoramic sunroof as well. There is lights in the footwell area and there are brown coloured custom fit leatherette seat covers as well. The rear continues to get side facing seats. An aftermarket touchscreen infotainment system has been installed that also shows feed from the rear parking camera. The gear knob on this SUV has also been customised.