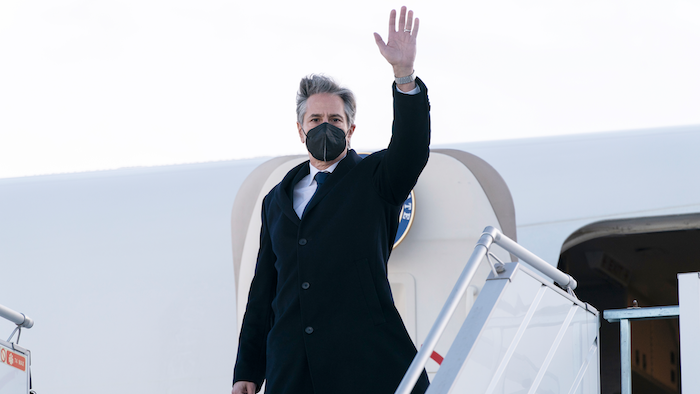 WASHINGTON (AP) — U.S. and European officials are coordinating with natural gas suppliers around the globe to cushion the impact if Russia were to cut off energy supplies in the conflict over Ukraine, Biden administration officials say.

The U.S. and European allies have promised punishing economic and political sanctions if Russia moves its military into Ukraine, but worry about repercussions for Europeans from any such sanctions, including Russia potentially cutting off delivery of its natural gas to Europe at the height of winter.

Putin has deployed roughly 100,000 troops near Ukraine’s border for weeks, sparking a diplomatic crisis for Europe and the United States. He denies any intention of invading.

Any U.S. and European measures against Russia in the event of an invasion “also have consequences for others, including us,” Secretary of State Antony Blinken said in remarks as part of a lecture series Monday night.

“There’s a cost imposed on everyone,” Blinken said. “But we have done a tremendous amount of work to mitigate any effects of sanctions on those…imposing them, as well as any retaliatory action that Russia might take.”

Two senior U.S. administration officials separately briefed reporters Tuesday about efforts by Biden’s national security team to deal with any knock-on effects from sanctions. The officials spoke on the condition of anonymity to discuss the deliberations.

If needed, Europe would look to natural gas supplies in North Africa, the Middle East, Asia and the United States. The effort would require “rather smaller volumes from a multitude of sources” to make up for a Russian cutoff, according to one of the officials.

The Biden administration has acknowledged that President Vladimir Putin has high tolerance for the damage to Russia’s economy that would come with sanctions. But officials said that the “start high, stay high” approach to penalties they have warned the Russians they would take in negotiations could have an impact on Putin’s calculations.

One official said that sanctions that could spur inflation in Russian “in the mid-teens” and a deep recession that would not help Putin “win hearts and minds” among Russians, according to the second official.

Paul Cicio, the group’s president, told reporters on Tuesday that his group has not taken a position on how the U.S. should respond to tensions between Russia and Europe over natural gas.

“My own personal view is that if Europe needs gas, the U.S. should be there to supply our allies,″ Cicio said, noting that China is the top recipient of U.S. gas exports.