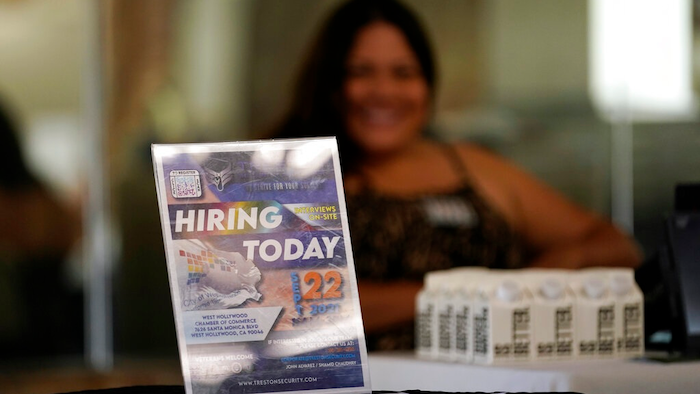 A hiring sign is placed at a booth for prospective employers during a job fair Wednesday, Sept. 22, 2021, in the West Hollywood section of Los Angeles. The number of Americans applying for unemployment benefits rose to the highest level in three months as the fast-spreading omicron variant disrupted the job market. Jobless claims rose for the third straight week — by 55,000 to 286,000, highest since mid-October, the Labor Department reported Thursday, Jan. 20, 2022.

WASHINGTON (AP) — After three consecutive weeks of unemployment claims that appeared to rise in tandem with omicron, fewer Americans applied for unemployment benefits for the second week in a row.

The four-week average for claims, which compensates for weekly volatility, rose by nearly 8,000 to 255,000. It was the fifth straight week of increases for the average, mirroring a surge in COVID-19 cases in parts of the country.

A winter spike in infections fueled by the omicron variant stymied what had been a strong comeback from last year’s short but devastating coronavirus recession. Jobless claims, a proxy for layoffs, had fallen mostly steadily for about a year and late last year dipped below the pre-pandemic average of around 220,000 a week. Economists expect claims to return to those lower levels as the virus fades, which is already happening in areas first hit with omicron.

On Tuesday, the government reported that the number of posted jobs rose 1.4% to 10.9 million on the last day of December, compared with the previous month. That is far higher than pre-pandemic levels, though just below the record number of 11.1 million that was reached in July. The data suggests companies were still desperate to hire workers last month yet had trouble finding enough people to fill their open jobs.

On Friday, the Labor Department will release its monthly jobs report. Analysts are forecasting that the economy added about 175,000 jobs. In December, the unemployment rate fell to 3.9%, a long steady decline from heights of nearly 15% in the spring of 2020 when the pandemic devastated the global economy.

A scorching U.S. economy has triggered inflation not seen in four decades, leading the Federal Reserve to ease its support for the economy. The Fed has signaled that it would begin a series of interest-rate hikes in March, reversing pandemic-era policies that have fueled hiring and growth but also stubborn inflation.

Last week, the government reported that the U.S. economy expanded 5.7% in 2021, growing last year at the fastest pace since a 7.2% surge in 1984 after a previous recession.

In total, 1.6 million Americans were collecting jobless aid the week that ended Jan. 22, a slight drop from the previous week.