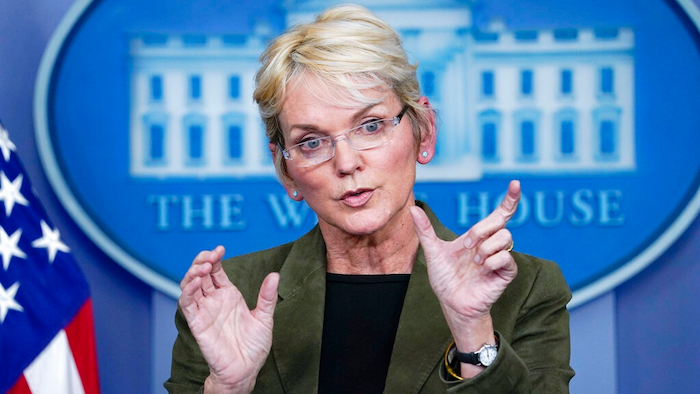 Energy Secretary Jennifer Granholm speaks during a press briefing at the White House, Nov. 23, 2021, in Washington. The Biden administration has issued its first clean energy loan guarantee, reviving an Obama-era program that disbursed billions of dollars in guarantees to help launch the country’s first utility-scale wind and solar farms a decade ago but has largely gone dormant in recent years. The Energy Department said it would guarantee up to $1 billion in loans to help a Nebraska company scale up production of “clean” hydrogen to convert natural gas into commercial products that enhance tires and produce ammonia-based fertilizer.

WASHINGTON (AP) — The Biden administration has issued its first clean energy loan guarantee, reviving an Obama-era program that helped launch the country’s first utility-scale wind and solar farms a decade ago but has largely gone dormant in recent years.

The Energy Department said it would guarantee up to $1 billion in loans to help a Nebraska company scale up production of “clean” hydrogen to convert natural gas into commercial products used in manufacturing and agriculture.

The revived loan program is part of President Joe Biden’s efforts to slash planet-warming greenhouse gas emissions in half by 2030, amid legislative gridlock that has stalled a $2 trillion package of social and environmental initiatives. It’s among the tools he can use without new legislation.

Under President Barack Obama, the program boosted Tesla’s efforts to become a behemoth in electric cars, but it stumbled after the California solar company Solyndra failed soon after receiving federal aid a decade ago, costing taxpayers more than $500 million. Republicans and other critics seized on Solyndra as an example of wasteful spending under Obama’s stimulus program.

The aid to Lincoln-based Monolith Inc. is the program’s first non-nuclear loan guarantee since 2016.

Monolith produces “carbon black,” a powdery substance that enhances tires and other rubber products, and hydrogen used in ammonia-based fertilizer.

Monolith says it can create both products while vastly shrinking their greenhouse gas emissions. The company plans to use the Energy Department guarantee to finance a major expansion of its existing Hallam, Nebraska, plant that produces hydrogen and carbon black.

Energy Secretary Jennifer Granholm hailed the announcement as a sign the once-high profile loan program is back in business and ready to support deployment of clean energy, from biofuels to nuclear power and offshore wind.

“Advanced, clean production technology like Monolith’s are the types of impactful projects that support not just sustainability, but economic growth and clean energy jobs for the American people,” Granholm said.

Monolith will use the loan guarantees to “develop the innovation needed to help lead the clean energy transition, while also creating high-paying green jobs and strengthening our nation’s supply chain,” said Rob Hanson, the company’s co-founder and CEO.

Jigar Shah, who took over as director of the loan program office last year, said the program has drawn over 70 applications valued at more than $60 billion. The new bipartisan infrastructure law expanded the program’s authority and broadened the pool of eligible borrowers. The agency has access to roughly $40 billion in loan authority and expects to make an array of loan commitments in 2022, Shah said.

While Tesla and Solyndra are the best known examples, the loan office manages over 30 projects worth more than $30 billion and generates $500 million in interest income for the federal government every year, Shah said.

“We have a track record of our projects being winners,” he said in an interview. “And I know that we get a lot of press on the ones who don’t succeed,” but the program has suffered just over $1 billion in losses since 2011, or roughly 3.3% of its investment, a figure Shah said is on par with commercial banks.

“Many people think we’re not taking enough risk,” he said. ”But we’re in line with the best of the best.”

Some companies that apply for assistance “want the Loan Program Office to be sort of your fairy godmother in Cinderella, where you show up in rags and I create a carriage for you out of a pumpkin and turn all the mice into horses and all that stuff,” Shah said. “But it’s just not the way it works.″

A former clean-energy entrepreneur who founded the SunEdison solar company, Shah said he understands the mindset of loan applicants —“you sell the dream, right?” — but says his job as a government official is to provide a reality check even as he offers assistance.

“Tell me how you’re going to make the mice into horses, and pumpkins into a carriage and the rags into a beautiful dress,” he said, continuing the metaphor. “What processes and procedures have you learned to put in place? How are you going to protect my money?”

Monolith is the first-ever commercial-scale project to deploy a technology known as methane pyrolysis, which converts natural gas into carbon black and hydrogen. While carbon black typically emits large volumes of carbon dioxide and other gases, Monolith says its technologies aim to reduce greenhouse gases by up to 80% compared to traditional production.

Robert Howarth, professor of ecology and environmental biology at Cornell University, said he is “highly skeptical that this can be done with low emissions,″ adding that he was “very disappointed” at the Energy Department’s action.

“I very much doubt that emission reductions will be anywhere near that large when the upstream fugitive methane emissions are included,″ Howarth said in an email.

Shah called Howarth a friend, but said he is confident Monolith can meets its projections on carbon pollution.

“Even with the worst case scenario, and methane leakage, we still have 80% reduction in greenhouse gas emissions versus the business as usual processes,” he said.

Monolith said it would create about 1,000 jobs to support expansion of its hydrogen plant

Goodyear Tire & Rubber Co., one of two tiremakers that has signed a letter of intent to purchase the carbon black, said in a statement it was “excited” to work with Monolith to reduce its carbon footprint.

“As the only U.S.-headquartered tire manufacturer, it’s especially rewarding to be at the connection point of significant U.S. innovation with Monolith” and the Energy Department, said Richard Kramer, Goodyear’s chairman and CEO.